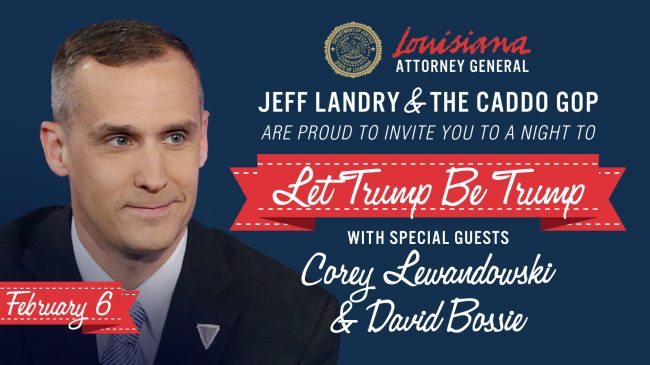 Join us for a special night with Louisiana Attorney General Jeff Landry, and his special guests, Corey R. Lewandowski, who is the former campaign manager for President Trump, and David Bossie, former White House aide to President Trump. Both Lewandowski and Bossie have both written a book, Let Trump Be Trump, and will sign copies of their book, at the event, as well.

The event is Tuesday, February 6, with the formal program beginning at 5:30 p.m. and there will be time for a “Meet and Greet” and media interviews beginning at 4:30 p.m.

As for the formal program, General Landry will introduce Lewandowski and Bossie, and they’ll share their first hand experiences of working for President Trump, as well as their time on the campaign trail last year.

This is a night you won’t want to miss.

Get Your Tickets Here: https://www.eventbrite.com/e/attorney-general-landry-and-a-night-to-let-trump-be-trump-tickets-41906989935